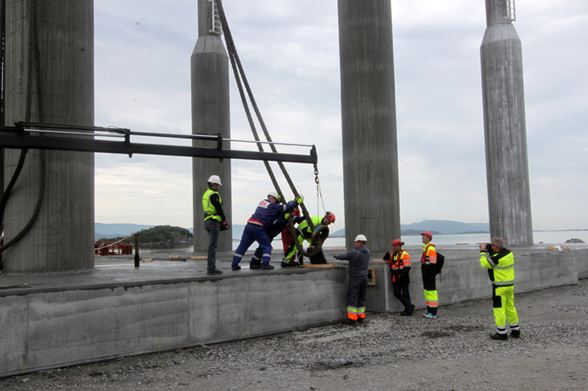 Uglen, with a lifting capacity of 600 t, was contracted by Sjøentreprenøren AS (a subsidiary of NCC) to take on the demanding lifting, transportation and installation of 8 prefabricated seamarks from Søvika (the fabrication location) to the shipping lane at Lepsøy, an island north of Ålesund. Assisted by divers and positioning equipment Uglen ensured successful seabed installation within the 5 cm precision limit. A 17-metre high tower is placed on the seamark’s 100 m² foundation plate, which has a height of 1.25 m. Each of the prefabricated concrete seamarks weighs about 430 ton. The seamarks are equipped with radar reflector and lights. The official inauguration will take place on 20 September. This is the first time that seamarks of this type is used in Norway and they are the heaviest ever installed.


Due to the fact that the Lepsøy reef is located fairly near the open sea, this project was particularly dependent on calm sea and minimal winds, which fortunately was the case during the entire installation period. (The local weatherman said that this week had the best weather up to then this year). Ugland had to anchor and position the vessel during each installation, and the entire contract was completed in 5 days, putting the vessel and crew to the test with stringent installation tolerances.

FLEET RENEWAL AND SALE OF VESSELS

During the past years a fleet renewal process has been ongoing bringing newbuilds into the fleet and selling off vessels.
/ Read more
FLEET RENEWAL AND SALE OF VESSELS
30.09.2020 09:08

NAMING AND DELIVERY OF MV FERMITA